A retaining wall is the unsung hero on any elevated landscape. Few people consciously think about it, even though that wall is the only thing between you and a mountain of dirt. It literally holds back tons upon tons of erosive soils from spilling across your property, possibly even sliding into your home or business. When the retaining wall fails, the results can be extensive and expensive.

The failure of a wall is all about erosion, the mixture of soil and water behind the wall, and the pressure both exert. The degradation of any retaining wall begins as a slow process, but eventually, the wall begins to show evident signs of failure. If the problems involved are left unmitigated, the wall will come tumbling down. If your wall is leaning or collapsing, call our Dallas retaining wall repair contractors to get the problem fixed professionally! 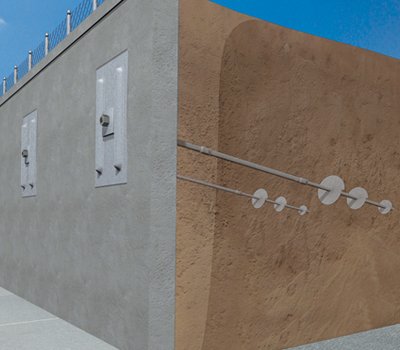 Retaining Wall Collapsing or Tilting: Dallas gets enough rain that retaining wall repair is often necessary, particularly where gardens are watered regularly. Because of soil issues and either the loss of water or an accumulation of water, the footing of the wall will lose its hold. Sometimes the wall was not properly reinforced. Wooden retaining walls will begin to rot and deteriorate, and will eventually collapse, especially when they aren’t constructed with drainage “weeps.”

Separation from an adjoining wall: Water accumulation behind a wall expands the soil and adds additional weight and pressure, which can cause the retaining wall to separate from an adjoining wall, and eventually fail. Sometimes a retaining wall will separate from a supporting wall because of poor construction or because the wall was not constructed well enough to withstand the weight and pressure behind it.

Crumbling: A retaining wall will crumble most often because of poor design and/or fabrication. A wall made from poorly mixed concrete may be unable to bear the load behind it. Any concrete wall that lacks rebar reinforcement or is constructed with inadequate rebar is a candidate for failure. That’s why our team here in Dallas, Fort Worth recommends fixing walls that are leaning or collapsed.

At Vesta Foundation Solutions, we primarily recommend two repair options: wall anchors and helical tiebacks. Both techniques incorporate a steel wall bracket affixed to the exterior of the retaining wall to serve as a brace and to sufficiently distribute the clamping pressure of the anchor. Our goal is to return the wall to its original position and structural integrity, which restores its appearance and functionality.

Take a walk around your property to see whether your retaining wall shows indications of failure. If you see tilting, crumbling, or separation from an adjoining wall, call Vesta Foundation Solutions today at 214-427-1220 or fill in the online contact form below to schedule your free inspection from our for retaining wall repair contractors in Dallas, Fort Worth, and throughout the Metroplex area.