Signs Your Foundation is Affected by Expansive Soils

Expansive soils are one of the top natural hazards for structures in the U.S. Responsible for immense damage, they are capable of creating huge financial burdens on home and business owners. Prolonged exposure to expansive soils causes pressure on your foundation that causes a variety of noticeable problems. If your home is showing any of the following symptoms, it’s time to consider your repair options: 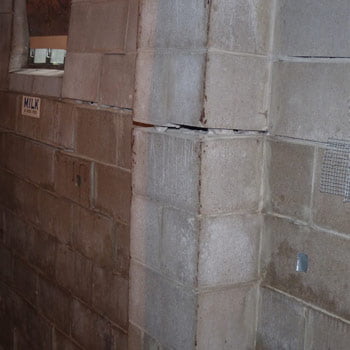 Soil expansion happens just how it sounds – soil absorbs water, expands, and increases in volume. Minerals in the dirt around your foundation are capable of absorbing water, which causes expansion and exerts force on the structure it surrounds. This creates worsening hydrostatic pressure, damaging your foundation and, eventually, your entire home.

When new structures are built, part of the construction process includes digging up soil that has never been disturbed before. Doing so changes it by making it less compact, even after being refilled. The fill soil no longer has the same consistency or support, which makes it more susceptible to shifting and sinking from water. During rainstorms and frost heave especially, the soil becomes saturated quickly.

How to Fix Your Foundation Problems

When dealing with foundation issues, it’s critical to have a professional diagnose and treat the problem correctly. An expert can determine what kind of soil resides around your home and what kind of repair solution is best. Some of our common recommendations include:

Keep Your Home Safe with Vesta

If you have noticed symptoms of a failing foundation in your home or business, the team at Vesta Foundation Solutions can help. Reach out to one of our helpful experts today to set up your free inspection and determine the best solution to keep your foundation durable and dependable.

To whom it may concern: I would like to give David Esparza a big "Thank You" for helping me get my driveway fixed. David is very...

Bryan and Cornileus were amazing. Our project was huge and required a lot of heavy lifting. Every day they came to work with smiles...

Hi Sydney, Thank you for excellent customer service and THREE CHEERS for Tim. I usually don't enjoy home inspections/sales presentations, but Tim was so knowledgeable,...

The Vesta crew, Adam, Daniel, Justin, and Ladell, did an excellent job of securing my foundation and leveling my floors. I would highly recommend...

I had a sinking concrete apron around my pool. I was considering replacing the concrete, which is very expensive, or "mudjacking" the concrete back...

Gino H. from Shawnee, OK purchased a charming old home built in 1939 with a full basement. Expanding soils that are so prevalent in...